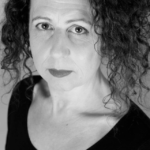 Mary Price O’Connor is an Interdisciplinary artist working with sound, music, movement and text. Having studied music at Dartington College of Arts she moved to London where she worked as a violinist, composer and performer, becoming a silent film accompanist in 2003 and in 2008 trained as a Dalcroze Eurhythmics Teacher. She has participated as an improviser/deviser/performer/facilitator across many different platforms including” The Chaosbaby Project “ with Stella Duffy, “Through The Door “with Angela Clerkin and Improbable , and working with Spare Tyre Theatre company . She plays with the band “Selkie”. Mary recently appeared in the short dance film premiered on BBC4 “We are Ready Now” made by dancer and choreographer Jack Thompson  and performed as an actor /musician in Shakespeare’s Globe theatre  film “Christmas at the Snow Globe” (December 2020)  having been a member of the original cast at the Globe theatre in December 2019. Mary has also taught and participated in collaborative pieces  online throughout the Covid-19 pandemic and has continued to develop her ongoing research project “The Moving Theatre Lab” .